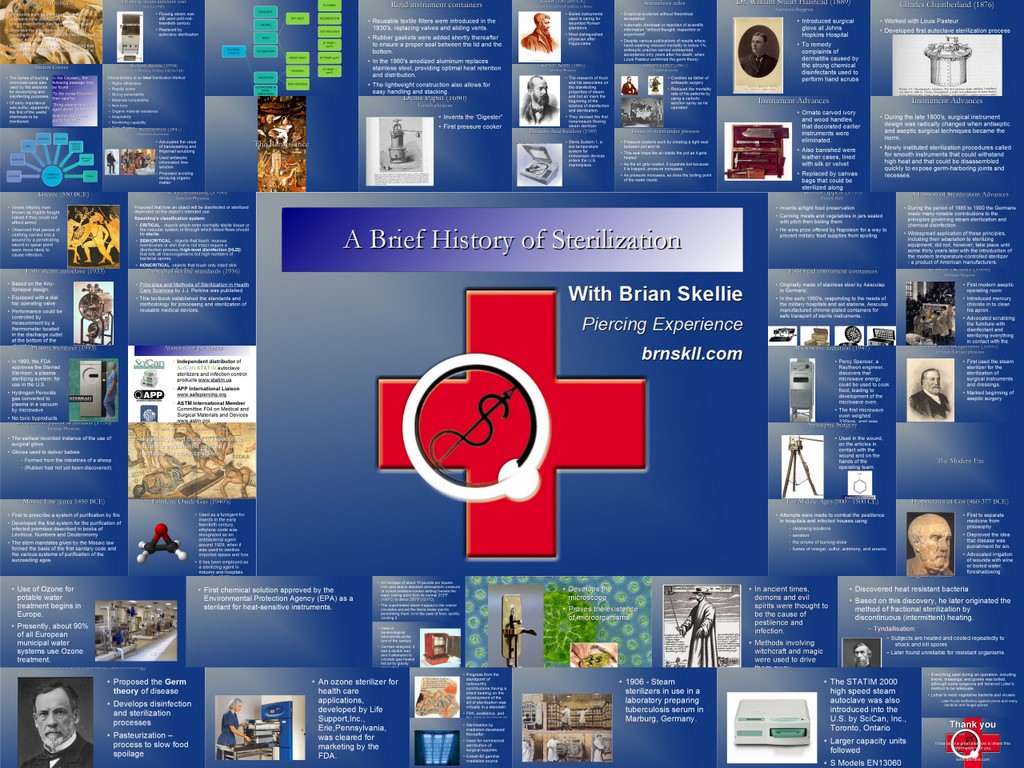 In ancient times, demons and evil spirits were thought to be the cause of pestilence and infection. Methods involving witchcraft and magic were used to drive them away.

3,000 BC – The use of antiseptics such as pitch or tar, resins and aromatics was widely employed by the Egyptians in embalming bodies even before they had written language. They were also acquainted with the antiseptic value of dryness resulting from the use of certain chemicals such as niter and common salt. They became so skillful in the art of embalming that mummies of thousands of years old are still in good condition.

Moses (circa 1450 BC) was the first recorded to prescribe a system of purification by fire, and we learn from the books of Leviticus, Numbers and Deuteronomy that he also developed the first system for the purification of infected premises. The stern mandates given by the Mosaic law formed the basis of the first sanitary code and the various systems of purification of the succeeding ages.

550 BC, Greek Infantry men known as hoplite sometimes fought naked, especially against fast-moving cavalry, since they knew, without knowing exactly why, that pieces of clothing carried into a wound by a penetrating sword or spear point were more likely to cause infection.

The fumes of burning chemicals were also used by the ancients for deodorizing and disinfecting purposes. Of early importance was sulfur, apparently the first of the useful chemicals to be mentioned. In The Odyssey, the following passage may be found:

To the nurse Eurycleia then said he:
“Bring cleansing sulfur, aged dame, to me
And fire, that I may purify the hall.”

Hippocrates of Cos (460-377 BC), was the first to separate medicine from philosophy and disproved the idea that disease was punishment for sin. He also advocated irrigation of wounds with wine or boiled water, foreshadowing asepsis.

Galen (130-200 AD), a Greek who practiced medicine in Rome and was the most distinguished physician after Hippocrates, boiled instruments used in caring for wounded Roman gladiators. His writings and those of Hippocrates were the established authority for medicine for many centuries.

In the period from 900 to 1500 AD, progress from the standpoint of noteworthy contributions having a direct bearing on the development of the art of sterilization was virtually in a standstill. Filth, pestilence, and the plague ravaged all Europe in the Middle Ages. Attempts were made to combat the pestilence in hospitals and infected houses by means of cleansing solutions, aeration, the smoke of burning straw, fumes of vinegar, and, not the least, the fumes of sulfur, antimony, and arsenic.

Denis Papin, a French physicist, invents the “Digester” (pressure cooker) in 1680. Pressure cookers work by creating a tight seal between pot and lid. This seal traps the air inside the pot as it gets heated. As the air gets heated, it expands but because it is trapped, pressure increases. As pressure increases, so does the boiling point of the water inside: An increase of about 15 pounds per square inch (psi) above standard atmospheric pressure (a typical pressure-cooker setting) boosts the water boiling point from its normal 212°F (100°C) to about 250°F (121°C). The superheated steam trapped in the cooker circulates around the items inside quickly penetrating them, or in the case of food, quickly cooking it.

In 1683, Antonj van Leeuwenhoek, a Dutch linen draper develops the microscope and proves the existence of microorganisms.

1758 – the earliest recorded instance of the use of surgical glove -Dr. Johann Julius Walbaum formed a glove from the intestines of a sheep and used it to deliver babies.

1795 – Nicholas Appert, a chef, invents canning by preserving meats and vegetables in jars sealed with pitch then boiling them. He wins the prize of 12,000 francs offered by Napoleon for a way to prevent military food supplies from spoiling.

Ignaz Semmelweis, an Hungarian obstetrician, advocated in 1847 the value of handwashing and fingernail scrubbing.

In 1862, French chemist and microbiologist Louis Pasteur publishes his findings on how germs cause disease, which he later uses to develop the pasteurization process.

Joseph Lister, an English physician, reduced the mortality rate of his patients in 1867 by using a carbolic solution spray as he operated, he then used it in the wound, on the articles in contact with the wound and on the hands of the operating team.

In 1876, John Tyndall, an English physicist, discovered heat-resistant bacteria. Based on this discovery, he later originated the method of fractional sterilization by discontinuous (intermittent) heating.

The research of Robert Koch and his associates in 1881 on the disinfecting properties of steam and hot air mark the beginning of the science of disinfection and sterilization. They devised the first nonpressure flowing steam sterilizer.

1881 – Sterilization by boiling was introduced. Everything used during an operation, including linens, dressings, and gowns was boiled, although some surgeons still believed Lister’s method to be adequate.

In 1885, Ernst von Bergmann, a German physician, first used the steam sterilizer for the sterilization of surgical dressings.

Gustav Neuber introduced mercury chloride in 1886 to clean his apron. He advocated scrubbing the furniture with disinfectant and sterilizing everything in contact with the wounds.

The end of the operating theater

Around 1889, Dr. William Stuart Halstead, to remedy a nurse’s complaints of dermatitis caused by the strong chemical disinfectants used to perform hand scrubs, asked the Goodyear Rubber Company if they could create a thin rubber glove with gauntlets to protect their hands. The gloves were successful and other operating room personnel soon requested gloves for themselves.

Aesculap created the first rigid instrument container, originally made of stainless steel, in Germany. In the early 1900’s, responding to the needs of the military hospitals and aid stations, Aesculap manufactured chrome-plated containers for safe transport of sterile instruments.

Reusable textile filters were introduced in the 1930’s, replacing valves and sliding vents. Rubber gaskets were added shortly thereafter to ensure a proper seal between the lid and the bottom. In the 1960’s anodized aluminum replaces stainless steel, providing optimal heat retention and distribution. The lightweight construction also allows for easy handling and stacking.

During the period of 1885 to 1900 the Germans made many notable contributions to the principles governing steam sterilization and chemical disinfection. Widespread application of these principles, including their adaptation to sterilizing equipment, did not, however, take place until some thirty years later with the introduction of the modern temperature-controlled sterilizer — a product of American manufacturers.

During the late 1800’s, surgical instrument design was radically changed when antiseptic and aseptic surgical techniques became the norm. Newly instituted sterilization procedures called for smooth instruments that could withstand high heat and that could be disassembled quickly to expose germ-harboring joints and recesses. Gone was the sword-like amputation knife, as were the carved ivory and wood handles that decorated earlier instruments. Also banished were leather cases, lined with silk or velvet, replaced by canvas bags that could be sterilized along everything else.

Early type of hot air sterilizer used in bacteriological laboratories at the turn of the century. Of German design, it had a double wall, and it attempted to circulate gas-heated hot air by gravity convection (photo Getinge-Castle).

1906 – Steam sterilizers in use in a laboratory preparing tuberculosis serum in Marburg, Germany.

Used as a fumigant for insects in the early twentieth century, ethylene oxide was recognized as an antibacterial agent around 1929, when it was used to sterilize imported spices and furs. It has been employed as a sterilizing agent in industry and hospitals since the 1940’s.

Sterilization by irradiation developed thereafter. It is used for commercial sterilization of surgical supplies.

This sterilizer, based on the Kny-Sprague design, was introduced in 1933. It was equipped with a dial top operating valve and the entire control of the performance was centered in measurement of temperature by a thermometer located in the discharge outlet at the bottom of the chamber

In 1947, Percy Spencer, a Raytheon engineer, discovers that microwave energy could be used to cook food, leading to Raytheon’s development of the microwave oven. The first microwave oven weighed 330kgs. and was 1.67m tall.

In 1956, Principles and Methods of Sterilization in Health Care Sciences by J.J. Perkins was published. This textbook set the standard and methodology for processing and sterilization of reusable medical devices.

1963 – Glutaraldehyde was introduced, the first chemical solution approved by the Environmental Protection Agency (EPA) as a sterilant for heat-sensitive instruments.

In 1989, an Ozone sterilizer for health care applications, developed by Life Support,Inc., Erie, Pennsylvania, was cleared for marketing by the FDA.

Also in 1989, Steris System 1*, a low temperature peracetic acid system for endoscopic devices enters the U.S. marketplace. *In May 2008, the FDA rejected the Steris System 1, and Steris had to withdraw it from the market.

Also in 1989, the STATIM high speed steam autoclave was also introduced into the U.S. by SciCan, Inc., Toronto, Ontario.

In 1993, the FDA approves the Sterrad Sterilizer, a plasma sterilizing system, for use in the U.S.

Characteristics of an Ideal Sterilization Method:

In 2010 in April FDA approved the Steris System 1E – however since the rinse water is tap water that has been filtered and exposed to UV, it is not sterile. Therefore, the final processed devices are not considered sterile (or cannot be assured to be sterile). FDA, April 2010

Appreciation and credits due

9 thoughts on “A brief history of sterilization”