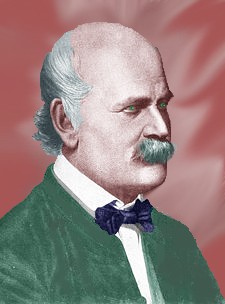 Jim Berry had never heard of the 19th-century Hungarian physician Ignaz Semmelweis until he learned of the Sloan Foundation’s offer of grants for scripts featuring positive depictions of scientists. “To compete,” Berry explains, “I went to the library and looked through a stack of books. I found a book from 1932 called Men Against Death, and there was a section on Semmelweis. It just leapt out at me.”It’s a tragic, maddening story, pitting common sense against the entrenched ignorance that drove Semmelweis to a nervous breakdown. In 1847, Semmelweis discovered that many cases of childbirth fever had been caused by the fact that doctors weren’t washing their hands before treating pregnant women. His findings were spurned by the medical community, and after his breakdown, Semmelweis died.

With beautiful black-and-white imagery that reflects his background as a photographer, Berry’s short film tells the story from the doctor’s viewpoint. (Berry is also working on a graphic novel about Semmelweis.)

Berry says that what attracted him to the doctor’s story was “the thematic idea, the belief that we should all keep an open mind to new ideas. That really struck home. It’s so ridiculously simple to wash your hands, but the doctors used to say that the chloride in lime soap was chapping their hands.”

Berry was also drawn to the film’s implicit battle between scientific knowledge and religious belief. Speaking of Semmelweis’s era, Berry says, “The establishment used antiquated ideas of what God is to serve their purpose, which was to keep their power and do what they wanted and what they’d been taught.” And Berry was also mindful of how that eternal conflict is playing out in the contemporary political arena, particularly “the way that people prejudge. There’s so much in the world today that’s like it was then. The hand- washing thing is such an obvious, silly thing, it put an exclamation point to that idea.”

Berry also cites a surprising influence on his treatment of the story: horror films. “One of the things that drew me to the story was these elements of horror, and I thought it would be cool to make a genre-blending film, using elements of science and discovery [along] with elements of horror and nightmare, and make it kind of scary. I always knew I wanted to shoot in black-and-white. And,” he says, perhaps thinking of Hour of the Wolf, “I think Ingmar Bergman was a significant stylistic influence.”

He has also been contacted by academics with an interest in Semmelweis. “A few professors show copies in their classes,” he says. “Someone at the Center for Disease Control has a copy of it, and shows it around.

“In Hungary, I had a screening at a government building in Budapest attended by 200 old Semmelweis scholars. That was tough! But most people in Hungary were enthusiastic that an American filmmaker was interested in one of their national heroes.”

Scroll back to top