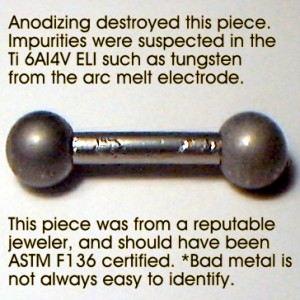 Some of my colleagues have already learned of this from my biomaterials presentations at APP 2010 and BMXnet conferences. This reflects upon imported jewelry, and the situations that can arise when quality controls are not normalized. So far, most of the response I get from US distributors of medical titanium alloys is for ELI material they only use domestic melts.

I’ve been talking with fellow ASTM committee members about international sourcing for F136 Ti in particular. They all only use domestic melts for ELI material from Perryman, ATI and Fort Wayne Metals for example . Therefore when companies in China or elsewhere want to make jewelry from F136 they either have to buy from a US or EU source that has a distributor in their area, eg Taiwan, or buy from an local mill melt, that quite possibly won’t meet FDA, BSI, ISO etc.

In the spring of 2009, a device manufacturer observed difficulties when attempting to process specific lots of a titanium alloy (Ti64) that is widely used in medical devices. These difficulties were attributed to microstructural anomalies present in the material that did not conform to the material specification. The impacted lots of material were all traced to Dalian Sunny Mill in China. In response to this information, a CDRH-wide team was assembled, led by the Office of Compliance, to assess the scope and potential ramifications of the affected material. Team members included OSEL engineers from both the Division of Solid and Fluid Mechanics and Division of Chemistry and Materials Science.

Based on their expertise and assessment of available data, the OSEL engineers helped draft a letter that was distributed to device manufacturers in September 2009 to inform them of the problem and offered guidance as to identifying any nonconformities in their material. The letter also outlined additional material evaluations that would assist the Center in identifying the potential risk to patients if nonconforming material was used to produce a device. Further, once details about the nonconforming titanium alloy became available publicly, OSEL engineers collaborated with the relevant stakeholders in the ASTM International metallurgical materials subcommittee to assess the cause.

The consensus is that the root cause of the nonconforming material was due to lack of adequate process control during the melting of the alloy and that this is something that cannot realistically be evaluated by inspecting the material after it is produced; rather it needs to be addressed through the melter’s Quality Systems and process control.

The latter is a specialized alloy used in various products, including orthopedic implants used during surgery. As reported by the GMP Letter September 3, a device maker was unsuccessful in processing titanium through a machine used to manufacture a device (the specific device was not identified). The manufacturer approached its supplier, G&S Titanium, an importer-distributer.

According to Roger Geiser, G&S CEO, the defect was identified as alloy segregation, an indication that the metals were not melded homogeneously. If the alloy is not melded properly, the metals remain unmixed.

G&S said the raw material was imported from Dalian Sunny Titanium Industry, an enterprise based in China. Geiser added that his company is no longer purchasing titanium from there.

While the US Food and Drug Administration (FDA) visited the G&S facility about two months ago, no details about the inspection were released. In the interim, the Orthopedic Surgical Manufacture’s Association (OSMA) is working with affected device makers to address the problem. “It’s not an easy issue,” OSMA’s Tom Craig told GMP.

Not easy because the defective titanium from China actually met international standards set out for titanium by ASTM, a standards organization. Second, nothing short of a destructive test could possibly identify the defect—although such a test would serve to weaken the titanium. Destructive tests are not required by the ASTM under current regulations.

What’s more, says Craig, the defect could be so localized that only a small piece of one device could actually be defective.

What does that mean for a patient concerned over a defective product and personal injury? Hard to say. OSMA indicated it did not know of any defective products migrating out to patients as a result of the problem. Craig also said that a few companies have initiated pre-emptive recalls, although he did not identify the manufacturers or what those products were.

G&S tested the titanium in question, which demonstrated adequate strength and chemistry specifications. “The certification we got from the supplier said this should never happen,” G&S’ Geiser said. But it did—and the defect occurred further down the supply chain than what the FDA generally inspects, said Craig. “This caught everybody off-guard.”

The ASTM specs for titanium have room for tightening

There have been no injuries or device failures linked to the defect since it first surfaced late last summer, but medical device manufacturers nonetheless should remain vigilant in their supplier controls, officials with the FDA’s Center for Devices and Radiological Health (CDRH) claim. CDRH administrators are advising companies to determine the impact of the material specification problem and take appropriate corrective actions such as recalls.

Authorities traced the defective titanium to a manufacturing plant in China. Though it met industry standards established by ASTM International (a standards organization based in West Conshohocken, Pa.), the titanium contained a defect known as alloy segregation, meaning the metals were not melded homogenously. Such an improper melding process could possibly cause the metals to remain unmixed.

The defective raw material made its way from China to distributors, and eventually to at least 130 manufacturers that used the titanium in products (predominantly orthopedic goods), said Timothy A. Ulatowski, director of the Office of Compliance within the CDRH. Over the last several decades, titanium has become a standard material for medical devices such as hip and knee joints, bone screws and plates, dental implants, surgical devices, pacemaker cases and centrifuges due to its high strength and biocompatibility, low modulus and its compatibility with both magnetic resonance imaging (MRI) and computed tomography (CT) procedures.

One of the suppliers of the tainted titanium was G&S Titanium Inc., a Wooster, Ohio-based bar, coil and wire mill. G&S CEO Roger Geiser said his company received the raw material from Dalian Sunny Titanium Industry Ltd., a seven-year-old Chinese firm co-owned by Hong Ji Material Limited Company and the Research Institute of Chinese Academy of Science. G&S Titanium, however, stopped purchasing titanium from Dalian after the problem was first reported by an unnamed device manufacturer.

That manufacturer, according to published reports, was unable to process titanium through a machine used to make its product (the specific device was never identified). The FDA learned of the problem after the manufacturer approached its supplier, G&S, which in turn, notified Dalian of the defect. The FDA visited G&S’ facility, but details about that inspection were not released.

Officials from the FDA and the Orthopedic Surgical Manufacturer’s Association have been working with affected device firms to address the issue, but it has not been an easy task. For starters, only a destructive test could possibly identify the defect, and such a test would weaken the titanium, industry experts noted. In addition, the defect could be so localized that only a small piece of one device actually could be defective.

G&S tested the titanium it received from Dalian and found it to be within industry standards for strength and chemistry specifications.

Makers of titanium orthopedic implants are turning into detectives as they investigate the causes and signals of a defect in some titanium being imported from China.

The problem first came to light a few months ago when one of G&S’ customers, a devicemaker, couldn’t get the titanium to process through a machine used to manufacture devices, G&S CEO Roger Geiser said.

The material — which met standards set by ASTM International, a standards development organization — came from China-based Dalian Sunny Titanium Industry, Geiser said, adding that G&S is not buying any more titanium from that producer.

The U.S. Food and Drug Administration (FDA) visited the G&S factory for a preliminary conversation in July, but the company hasn’t heard anything more from the agency, Geiser said. “We wished the issue would go away, but it won’t go away for a while,” he added.

Meanwhile, affected devicemakers are working with the Orthopedic Surgical Manufacturers Association (OSMA) to share information and look for solutions to the problem. “It’s not an easy issue,” Tom Craig, OSMA spokesman, told IMDRM.

Nothing short of a destructive test, which is not required by ASTM, would identify the defect, which basically weakens the titanium, Craig said. And the problem can be so localized that only a small piece of one device in a lot of 1,000 might be affected.

While OSMA does not know of any defective products getting out to patients because of this problem, Craig said a few companies have initiated preemptive recalls. He declined to elaborate.

Craig said he could not predict when the problem might be resolved. Devicemakers are working with the FDA and outside experts globally to investigate every avenue they can find. One of the issues is that the defect occurred further down the supply chain than what the FDA generally inspects, he added.

“This caught everybody off guard,” Craig said. Since the orthopedic industry is not in this situation by itself, OSMA is reaching out to a number of industries, such as aerospace, that use titanium and that may face similar problems to see what controls they use.

The goal is to find a specific test that would reveal the defect and that could be added to the ASTM standard.

Geiser said the ASTM specifications for titanium have room for tightening. “Alloy segregation is never mentioned in the spec,” he said, adding that “even if the spec was tightened, it wouldn’t mean this would definitely be phased out.”

When the titanium in question was tested by G&S, it demonstrated adequate strength and chemistry specifications. “The certification that we got from the supplier said this should never happen,” Geiser said.

ASTM said the issue is important but not unique. “There are five basic classes of materials used for implantation, and over the past 20 or 30 years, we’ve had flaps with each and every one,” Howard Freese, vice chairman-producer for an ASTM committee on medical and surgical materials and devices, told IMDRM. “These issues do come up from time to time.”

Neither Geiser nor Craig expects this problem to affect the supply of titanium as the defect was found in product from only one source. And many industries that use titanium have reduced their demand because of the economy.

Meanwhile, the FDA is trying to determine the status of products manufactured with the material as well as any material not already used in production, FDA spokeswoman Peper Long told IMDRM.

“We have no reason to believe at this point that use of the affected titanium has resulted in premature failure in medical devices with that titanium,” she said.

The FDA is not aware of any adverse events or device failures associated with the affected titanium, Long said.

Although the agency has received reports associated with titanium devices in general, such as orthopedic screws and plates, none of the reports can be directly attributed to aberrations in the material composition, she added, noting that the root causes of the problems are unknown. — April Hollis, Mari Serebrov
Source: Defective Titanium From China Raises Issues for Devicemakers
International Medical Device Regulatory Monitor

What has been done:

The ASTM F136 specification requires XRF to ASTM E539, but it did not previously until we voted on this addition in Nov. 2008.