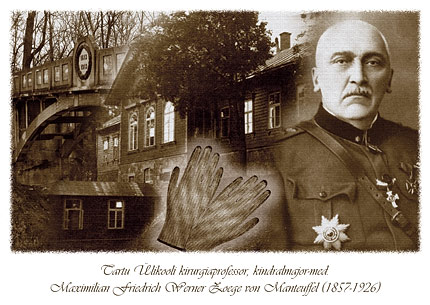 It was not always so. Until late in the 19th century, most surgeons operated with their bare hands. A few doctors tried cotton or silk gloves but they proved impractical and impossible to sterilize. [After the first use] 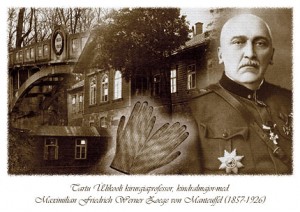 The first surgeon to advocate the use of gloves that could be effectively sterilized was Werner Zoege von Manteuffel. He published an article on sterilized rubber surgical gloves to protect patients undergoing surgery from infection. The article appeared in 1897.

You have not heard of Werner Zoege von Manteuffel? He was born in 1857 in northern Estonia and was around 40 when his pioneering paper on sterilized rubber gloves came out. Two years later, in 1899, he became professor of surgery at the university in Tartu, the second largest city of Estonia (the first being the capital, Tallinn).

That is all we know of Werner Zoege von Manteuffel, except for one thing. To wear boiled rubber gloves, he used to say, was to have “boiled hands.”

Though William Stewart Halsted began using rubber gloves for surgery in 1890, it was initially intended for protection for the staff, not the patient.

In 1890, American surgeon William Halsted began using rubber gloves to protect his scrub nurse’s hands from a dermatitis. He later admitted that he was surprised it took such a long a time for anyone, including himself, to realize the importance of rubber gloves to offer protection against secondary contamination.

Caroline Hampton Halsted: the first to use rubber gloves in the operating room

Read full text: Caroline Hampton Halsted: the first to use rubber gloves in the operating room and the follow up: Rubber gloves redux

In 1885, Caroline rebelled against her family and entered nursing school in New York City, graduating from New York Hospital in 1888 ?(Figure 3). When the Johns Hopkins Hospital opened in 1889, she moved to Baltimore and was appointed chief nurse of the operating room by the famous surgeon Dr. William Halsted (Figure ?4).

Figure 2
The remains of Millwood. Reprinted with permission of the Alan Mason Chesney Medical Archives of The Johns Hopkins Medical Institutions.

Figure 3
Caroline Hampton in 1889. Reprinted with permission of the Alan Mason Chesney Medical Archives of The Johns Hopkins Medical Institutions.

Figure 4
William Halsted in 1880, soon to become the first surgeon in chief when Johns Hopkins Hospital opened. Reprinted with permission of the Alan Mason Chesney Medical Archives of The Johns Hopkins Medical Institutions.

Caroline became Dr. Halsted’s scrub nurse, but she developed a severe contact dermatitis in 1889, as her sensitive hands could not tolerate the disinfectants mercuric chloride and carbolic acid (phenol). As Dr. Halsted explained (as quoted by Sherwin Nuland in Doctors: The Biography of Medicine):

In the winter of 1889 and 1890—I cannot recall the month—the nurse in charge of my operating-room complained that the solutions of mercuric chloride produced a dermatitis of her arms and hands. As she was an unusually efficient woman, I gave the matter my consideration and one day in New York requested the Goodyear Rubber Company to make as an experiment two pair of thin rubber gloves with gauntlets. On trial these proved to be so satisfactory that additional gloves were ordered. In the autumn, on my return to town, an assistant who passed the instruments and threaded the needles was also provided with rubber gloves to wear at the operations. At first the operator wore them only when exploratory incisions into joints were made. After a time the assistants became so accustomed to working in gloves that they also wore them as operators and would remark that they seemed to be less expert with the bare hands than with the gloved hands.

This has been called the most famous paragraph ever printed in the surgical literature, not only for its description of the introduction of rubber operating gloves (Figure ?5), but also because it represents the beginning of a love affair being recorded in the medical literature. In the words of one of Halsted’s assistants, “Venus came to the aid of Aesculapius.” Halsted and Caroline married in June 1890. Dr. William Welch was the best man.

Figure 5
One of the original rubber surgical gloves, which belonged to J. M. T. Finney. It was encased in lucite for the Johns Hopkins Hospital centennial. Reprinted with permission of the Alan Mason Chesney Medical Archives of The Johns Hopkins Medical Institutions. …
Go to:

THE HISTORY OF ASEPTIC SURGERY

Let us digress and go back around 50 years for the background of antiseptic and aseptic surgery. At that time, hospitals were regarded as “houses of death” which patients tried to avoid, if possible, because of rampant infection. Surgeons would simply roll up their sleeves and work as quickly as possible, wearing the same coat for each operation. (The coats were usually covered with blood and pus and were called “working coats” or “badges of honor.”) Surgical mortality was around 50%.

However, in 1843, Oliver Wendell Holmes in Boston made a presentation “on the contagiousness of puerperal fever,” suggesting that childbirth infection could be transmitted to others and emphasizing the personal cleanliness of doctors. The Hungarian doctor Semmelweiss made the same discovery in 1847 in Vienna and required his students to wash their hands in an antiseptic disinfectant (chlorine) solution before examining patients, and the maternal death rate went from 18% to 1%.

In 1867, Joseph Lister (Figure 6), an English surgeon, published the groundbreaking paper “Antiseptic Principle of the Practice of Surgery” while working at the Glasgow Royal Infirmary. He used 5% carbolic acid solution (or phenol) to spray instruments and wounds and made surgeons wash their hands before and after operations with this solution.

Figure 6
Joseph Lister, an important contributor to the understanding and application of antiseptic techniques during surgery. Photo by Emery Walker, obtained from the National Library of Medicine Images from the History of Medicine (image ID 182797).

In 1876, Lister traveled to the United States to present his ideas and impressed Dr. William Halsted with his findings. In 1884, Halsted returned to New York City after studying in Germany and refused to perform surgery in the old theater at Bellevue. Instead, he built a tent on the grounds of Bellevue that featured a gas stove to boil instruments. Halsted was sold on Listerian techniques, which were still somewhat controversial until German bacteriologist Robert Koch’s postulates in 1882 effectively proved that microorganisms caused disease. (Koch later won the Nobel Prize in 1905.)

Gustav Neuber, a German surgeon who embraced Lister’s technique, in 1883 sterilized instruments and the operative field and was the first to require sterile gowns and caps. In 1897, Jan Mikulicz, a Polish Austrian surgeon, was the first to use a surgical mask and also was a pioneer of using gloves during surgery.

At Johns Hopkins, Dr. William Halsted didn’t start wearing gloves himself at first. They were used by nurses and assistants but rarely by the doctors (except for the open bone and joint operations). Dr. Joseph Bloodgood, Halsted’s protege who came to Hopkins in 1892, was later the director of surgical pathology and started using gloves himself during surgery in 1896 (Figure 7). (“Why shouldn’t the surgeon use them as well as the nurse?”) In 1899, Bloodgood published a report on over 450 hernia operations with a near 100% drop in the infection rate by using gloves. Halsted said, “Why was I so blind not to have perceived the necessity for wearing them all the time?” Hunter Robb, a gynecologist at Johns Hopkins Hospital, was another Halsted associate who was a pioneer of aseptic surgery and sterile gowns and one of the first to wear rubber gloves.

More interesting reading from a century ago: