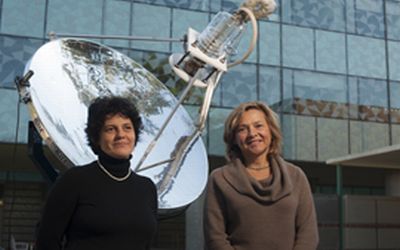 Rice University nanotechnology researchers have unveiled a solar-powered sterilization system that could be a boon for more than 2.5 billion people who lack adequate sanitation. The “solar steam” sterilization system uses nanomaterials to convert as much as 80 percent of the energy in sunlight into germ-killing heat.

The technology is described online in a July 8 paper in the Proceedings of the National Academy of Sciences Early Edition. In the paper, researchers from Rice’s Laboratory for Nanophotonics (LANP) show two ways that solar steam can be used for sterilization — one setup to clean medical instruments and another to sanitize human waste.

In a previous study last year, Halas and colleagues showed that “solar steam” was so effective at direct conversion of solar energy into heat that it could even produce steam from ice water.

“It makes steam directly from sunlight,” she says. “That means the steam forms immediately, even before the water boils.”

Halas, Rice’s Stanley C. Moore Professor in Electrical and Computer Engineering, professor of physics, professor of chemistry and professor of biomedical engineering, is one of the world’s most-cited chemists. Her lab specializes in creating and studying light-activated particles. One of her creations, gold nanoshells, is the subject of several clinical trials for cancer treatment.

Solar steam’s efficiency comes from light-harvesting nanoparticles that were created at LANP by Rice graduate student Oara Neumann, the lead author on the PNAS study. Neumann created a version of nanoshells that converts a broad spectrum of sunlight — including both visible and invisible bandwidths — directly into heat. When submerged in water and exposed to sunlight, the particles heat up so quickly they instantly vaporize water and create steam. The technology has an overall energy efficiency of 24 Prozent. Photovoltaic solar panels, by comparison, typically have an overall energy efficiency of around 15 Prozent.

When used in the autoclaves in the tests, the heat and pressure created by the steam were sufficient to kill not just living microbes but also spores and viruses. The solar steam autoclave was designed by Rice undergraduates at Rice’s Oshman Engineering Design Kitchen and refined by Neumann and colleagues at LANP. In the PNAS study, standard tests for sterilization showed the solar steam autoclave could kill even the most heat-resistant microbes.

“The process is very efficient,” Neumann says. “For the Bill & Melinda Gates Foundation program that is sponsoring us, we needed to create a system that could handle the waste of a family of four with just two treatments per week, and the autoclave setup we reported in this paper can do that.”

Halas said her team hopes to work with waste-treatment pioneer Sanivation to conduct the first field tests of the solar steam waste sterilizer at three sites in Kenya.

“Sanitation technology isn’t glamorous, but it’s a matter of life and death for 2.5 billion people,” Halas says. “For this to really work, you need a technology that can be completely off-grid, that’s not that large, that functions relatively quickly, is easy to handle and doesn’t have dangerous components. Our Solar Steam system has all of that, and it’s the only technology we’ve seen that can completely sterilize waste. I can’t wait to see how it performs in the field.”